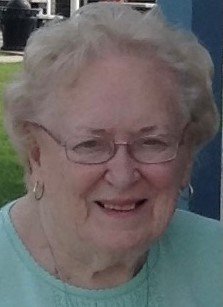 Ann B. Frasco,93, of Calabash, NC, formerly of Toms River, NJ and Haverstraw, NY, passed away peacefully on July 30, 2021, due to complications from Myasthenia Gravis.

Ann was born in Jersey City, NJ on June 26, 1928, to the late Raymond and Anna B. (Manning) Ronan. She was a 1946 graduate of St. Aloysius Academy. After graduation Ann went to work for the Telephone Company in New York City. On a summer visit to Davies Lake, in New City, NY, she met her future husband, Joseph E. Frasco and on September 23, 1950 they were married in All Saints Church, in Jersey City.
Ann was a stay at home Mom and she and Joe raised their four children in the house on Maple Avenue. When their youngest son started school, Ann got a job working at Provident Savings and Loan. It was the perfect place. Since Ann never learned to drive, she was able to walk to work every day. She retired after 20 years and in 1985, she and Joe moved to Toms River, NJ. where, in 2019, they celebrated their 69th Wedding Anniversary. Most recently, Ann was thrilled to be able to move to Calabash, where she would be close to her family.
Ann is survived by her four children, Barbara (John Joe) O’Donnell, Brian (Karen White), Mark (Leda Cook) and Chris (Kathy Gallagher). She is also survived by eight grandchildren, Kirsten O’Donnell Elwood (Tom), Michael (Tinia) Frasco, Jenny (Chris) Wallace, Paul Frasco, Mark D. (Melinda) Frasco, Joseph Frasco, Jonathan Frasco and Kate Frasco; eight great grandchildren, Breeley, Nathan, Noah, and Jaxson Frasco, Ryder Wallace, Brendan T. Elwood, Giuliana and Mark A. Frasco as well as many nieces and nephews.
Ann was predeceased by her parents, her husband Joe (2019) and her brother and sister-in-law, Rick and Alice Ronan.
In accordance with Ann’s wishes, there will be no services. On September 23, 2021, their 71st Wedding Anniversary, she will be reunited with Joe at the Brigadier General William C. Doyle Veterans’ Memorial Cemetery.
Donations in Ann’s name can be made to St. Jude Children’s Research Hospital, 501 St. Jude Place, Memphis, TN 38105, Lower Cape Fear LifeCare, Foundation (Wilmington), “In Memory of Ann Frasco”, 1414 Physicians Drive, Wilmington, NC 28401-7335 or the charity of one’s choice.
Arrangements are in the care of Coastal Cremations.
Share on Twitter Share on Facebook Share on Email
SEND FLOWERS