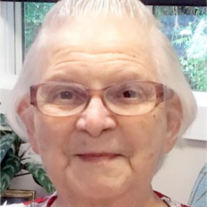 She worked several years canned apples in Harrisonburg, Virginia. It wasn’t long after that, that she decided then to be a stay at home Mom. Where she help raised three children.
She moved back to Wilmington, North Carolina in March of 2017 to be with her daughter. It was then she started to go to The Sanctuary of Wilmington. She would always tell her daughter how much she loved Pastor Daniel.

She leaves behind her memory her husband of sixty – three years, Stanley Reedy. One daughter: Patricia Godwin, both from Wilmington, North Carolina. She has one brother, and three sisters all from Virginia.
Irene also had another daughter Cathy Wells and a son Clark Reedy who both pass away in the year of 2011. She also had a son-in-law David Godwin who pass away in November 2013.

I would also like to thank, Lower Cape Fear Hospice for taking such good care of my Mom while she was there. Words can’t express how much you do for your patients there. God bless you all.

A memorial service will be held at 6 p.m. Monday. July, 3, at
The Sanctuary of Wilmington,
1111 The Cape Blvd. Wilmington NC 28412
With Pastor Daniel Cook officiating.