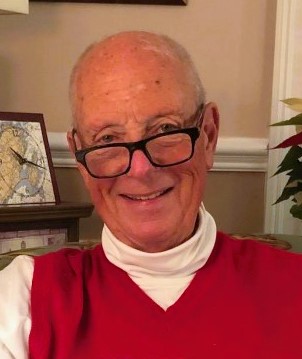 On Sunday, November 27th at the age of 79, Bruce Daniel Benn peacefully set sail into the calm waters of Heaven. After a courageous battle with Parkinson’s disease, he passed away gently in his home in Sneads Ferry, NC with his wife, Barbara of 17 years, by his side. Bruce was an exceptional person who we remember for his wit, love of family, passion for golf and baseball, interest in reading, and leadership. He was an anchor to all when needed, providing sage advice, a humorous remedy, or a caring ear. Bruce was a loving son, husband, brother, father, step-father, uncle, and grandfather.

He is preceded in death by his parents, Daniel Benn and Evelyn (Huntemen) Benn; and sister, Donna.

Bruce was born and lived in Farmingdale, NY and early on he attended school at St. Kilian Parish School, high school at Seton Hall Preparatory School, and then he was appointed to the United States Merchant Marine Academy at Kings Point, NY, where he also played baseball. He had many great accomplishments and interesting experiences in his life. He was an Eagle Scout, he met the Dalai Lama, and traveled the world.

Bruce was a well-respected colleague in the maritime industry during his years with Keystone Shipping Company as a Vice President and Alaska Tanker Company as a Chief Commercial Officer. While working for Keystone, he earned his MBA at Drexel University in Philadelphia. He made many friends and acquaintances in his professional life, as well as in his family life, living in Fallsington, PA.

Later, he moved to Portland, OR to work for Alaska Tanker Company, which is where he had many kayaking and birding adventures, thanks to the great Ottawa Program. He was a wonderful and willing outdoors explorer with Barbara. After retirement, they moved to North Carolina. Bruce and Barbara lived in the close-knit community of Northshore Country and Golf Club on the 1st tee which is also near the intercoastal waterway. It was here that Bruce continued to pursue his great love of golf and spending time at the ocean, two places that he felt happiest.

Bruce was inspired by the history of Civil War battles and generals, to be a stronger person, and this is his legacy, to persevere through life’s challenges with grace.

A Celebration of his life will be held on Thursday, January 12, 2023 at 11:00 am at All Saints Catholic Church in Hampstead, NC with Monsignor, Joseph officiating. A reception will immediately follow the funeral mass at the home of Bill and Isabelle Allanach.

The family would like to extend a special thanks to Lower Cape Fear Hospice Team for their dedicated service and exceptional care.

In lieu of flowers, donations may be made to Lower Cape Fear Life Care Center and their Hospice Team, 1414 Physicians Drive, Wilmington, NC 28401.

To express condolences or share a memory, please do so below. Coastal Cremations and Funeral Care-Jacksonville is serving the family.