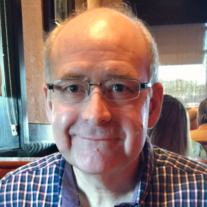 David (Dave) Mathews,55, recently of Bolivia, NC passed away on September 12, 2017 at the SECU Hospice Center – Lower Cape Fear HospiceCenter after a battle with cancer.

Dave attended Friendly High School in Ft. Washington, MD and Northern Virginia Community College (photography). His education was continued in California and Texas when he enlisted in the US Navy for Electronics Schools. During his seven year tour he served in Kodiak, Alaska and Diego Garcia. After his honorable discharge, he became a contractor for Jackson & Tulle at NASA Goddard Space Flight Center, Greenbelt, Md. until Dave accepted a position in Photo Engineering at National Geographic Society ( NatGeo), Washington, DC in 1995. Dave retired in November 2015 as Photo Engineering Manager.

He married Cherie Cunningham in 1995 in Waldorf, MD. In 1994, they met when they purchased townhouses side-by-side. Eventually, they sold the townhouses for one home which they filled with family, friends, strong coffee, laughter with various sizes and ages of dogs. They moved to North Carolina in January 2017.

Dave had a strong interest in computers, cooking, photography, Game of Thrones and any season in which the Redskins were winning! He was a kind and generous man always willing to help a friend or neighbor in need. He appreciated a good laugh anytime, even though getting him to smile in a photo could be a challenge.

A Celebration of Life Event for the family will be held for Dave Mathews in Winding River’s Beach House on Saturday, Oct. 7 from 4 pm to 7 pm. Donations in his name may be made to SECU Hospice Center’ 955 Mercy Lane, Bolivia, NC 28422. Condolences may also be sent to 461 Springwood Dr. SE, Bolivia, NC 28422