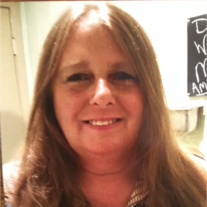 Deborah "Debbie" Ann Schilling, 61, of Supply, passed away unexpectedly on Sunday, July 9, 2017. Debbie was a 1974 graduate of Newfield High School in Selden, N.Y., and was a self-employed business owner in Supply, NC.

Debbie was predeceased by her father Frederick Schilling, Sr., her Grandmother, Catherine Thoden, and her loving husband Stephen Ford.

Debbie is survived by her mother and step-father Marilyn, and James Mawhinney, of Supply, NC, her brother Frederick Schilling, also of Supply, a nephew Timothy Schilling of Fredericksburg, VA, his wife and their six children, Brendon, Lauren, Patrick, Isabel, Alyssa and Christopher. She is also survived by 2 nieces, Meredith Schilling Austin and her husband Adam, of Massena, NY, and their five daughters, Marley, Gwendolyn, Adaleine, Mackinlee, Evangeline, and Gabrielle Schilling of Supply, NC and her three children, Alexander, Skyler, and Nicoli.

A Celebration of Life will be held at a later date.
Arrangements are in the care of Coastal Cremations, Carolina Shores, NC.