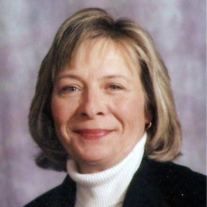 Edna Lynne Senn Dundon, 63, formerly of Westerville Ohio, passed away peacefully on July 20, 2016. Born and raised in Toledo, Lynne relocated to Columbus where she met her husband and raised her three beloved children. Lynne was preceded in death by her parents, Lawrence and Lee Senn; and her brother Michael Senn. She is survived by her husband of 27 years: Michael Dundon of Carolina Shores, NC; her children Chris and Joanna of Columbus, and Sean of Los Angeles, Ca.; her siblings: Charley (Ginny) Senn of San Luis Obispo, Ca., Carol (Patrick) Landversicht of Chesapeake, Va., and Mary Dee (Randy) Wiseman of Johnstown, Ohio; and numerous nieces and nephews. Lynne fought valiantly against cancer for five years and received great comfort from the love and support of her friends. She will be greatly missed by her canine companions, Rufus and Riley. A private family memorial service will be held at a later date.