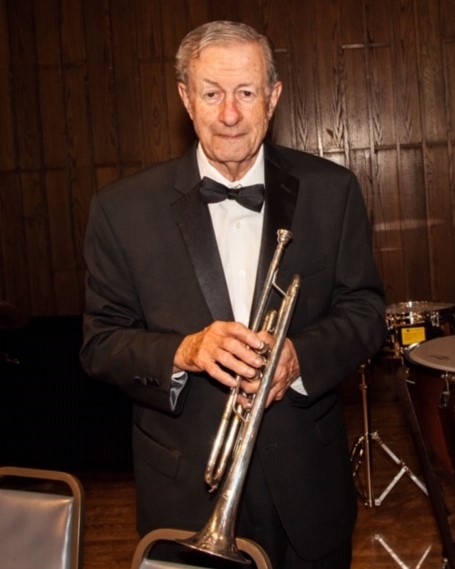 Francis Gerald (“Frank”) Mahoney of St. James, North Carolina, passed away on November 29, 2018 at the age of 80, at SECU Hospice House of Brunswick-Lower Cape Fear Hospice, surrounded by his loving family after a brief illness.

A lifelong musician, Frank was leading and playing trumpet in his own dance band before he was 20. He met his loving wife Joyce at Perkinston Junior College in Perkinston, Mississippi, and the couple married in July, 1959. Their first child, Mark, was born in July 1960. Frank graduated from the University of Southern Mississippi with a BA in Music Education in 1964, after which he served as band director and music teacher in high schools in Mississippi and Florida. As the family grew, Frank began his long and distinguished career in the insurance- financial services industry, eventually holding executive positions at SunAmerica Corporation in Atlanta and Los Angeles, and Jefferson Pilot in Greensboro, North Carolina.

As a father, he coached his children’s baseball teams and served as president of support organizations for their high school bands and athletic teams, and never missed a child’s performance, event or game.

In addition to his love for family and music, Frank was an avid golfer. Soon after his retirement in 2002, he and Joyce moved to Saint James, North Carolina, where Frank renewed his passion for jazz, concert and choral music, playing trumpet in the Brunswick Concert Band, and the Brunswick Big Band, which he led until recently, and sang in the Seanotes choir, also serving terms as its society Vice President and President.

A devout Catholic, he was a member of Sacred Heart Catholic Church in Southport, North Carolina, and the Knights of Columbus.

Frank was a true gentleman, a loving husband, father and grandfather, a supporter of his church and community, and friend to all he met.

Services will be held at Sacred Heart Catholic Church, 5269 Dosher Cut Off Southport, North Carolina 58461, on Thursday, December 6 at 3 pm. In lieu of flowers, contributions can be made to The Lower Cape Fear Hospice Center, 965 Mercy Lane, Bolivia, NC: https://www.lcfh.org/ways-to-give/memorials-tributes/ or to the charity of your choice.