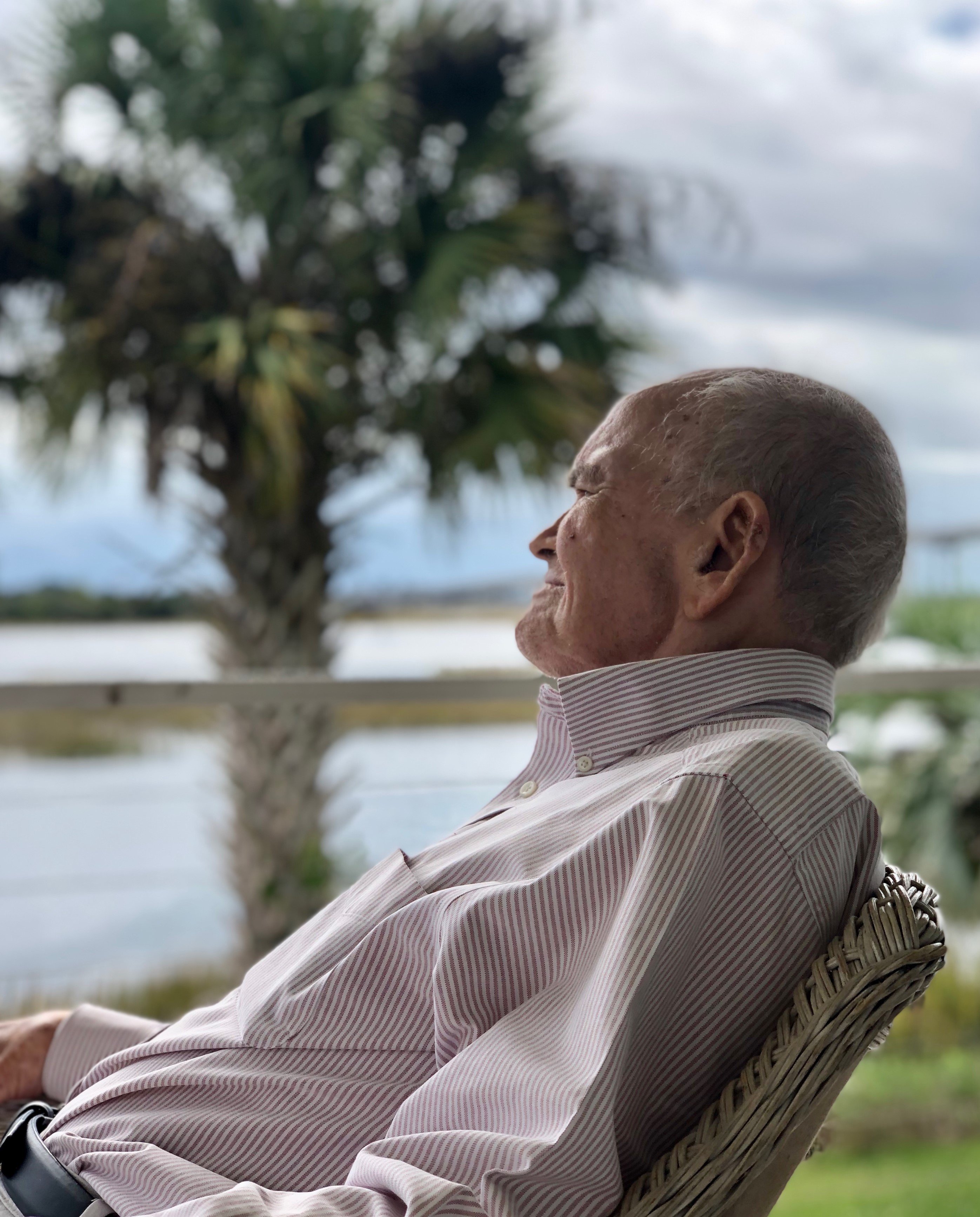 A true kindred spirit, Frank McGougan Nesmith, departed this world on the morning of July 16, 2020, at his home looking out to tidal marshes while surrounded by loved ones.
Frank was born in the farming community of Tabor City, North Carolina, on October 19, 1926. It wasn’t in a hospital, but in a little green house on the west side of town. His parents were Benjamin Lemuel Nesmith Jr and Martha McGougan Nesmith. Frank was predeceased by one brother, Benjamin Lemuel Nesmith Jr.

After graduation from Tabor City High School in 1943, Frank matriculated at The Citadel later that summer. He was drafted in 1944 and served in the Pacific Theater during World II. Upon his discharge, Frank returned to The Citadel and graduated in March of 1949. Frank started his professional career with Waccamaw Bank & Trust Company in Fairmont, North Carolina, where he soon met and married Carolyn Floyd on March 17, 1951. Frank was recalled to serve in the US Army Reserves during the Korean Conflict. They moved to Denver Colorado after his release from the Reserves, Frank returned to work at the Waccamaw Bank in Whiteville where their son, Frank McGougan (Mac) Nesmith Jr., was born.
With support from his father, Frank and his brother Ben established Nesmith Insurance Agency in Tabor City in 1954. Frank soon built a home at 7 Nesmith Street, that would serve as his residence for more than two decades. His two daughters, Eleanor Lynn Nesmith and Robin Nesmith (Murray), came of age there. An influence and unforgettable presence, Frank was a member of St. Paul United Methodist Church and the Rotary Club. Frank was active in the Boy Scouts, serving as Tabor’s Scoutmaster.
In the spring of 1975, Frank relocated to Sunset Beach, North Carolina. The ebb and flow of the tides and the rising and setting of the sun now shaped his daily routines, as well as a new-found philosophy. Every day was a new adventure where spirits soared and laughter filled the air.

A chance meeting between Frank and Claudia Sailor, an artist selling her paintings in a booth on the island, changed both of their lives, and their collaboration would greatly influence the lives of so many others. Together they came up with the notion of the Kindred Spirit. They mounted a simple metal mailbox on a weathered driftwood post and placed inside an empty notebook with an inscription inviting anyone who discovered the journal to read the existing messages and compose their own. A spit of land in Tubbs Inlet, accessible only by boat and christened Isle de Claudia, was the original setting of the Kindred Spirit Mailbox. Tubbs Inlet has always been defined by currents and shifting sands and it wasn’t long before the island was disappearing. The Mailbox was moved to Bird Island in the late 1970’s. Placing the Kindred Spirit Mailbox on Bird Island was a lark. No one could have predicted what a positive impact it would have on the future of Sunset Beach. In the early 1990’s when plans for developing Bird Island into a private resort were moving ahead, Frank started leading nature tours along the pristine stretch of beach. He always said that “if you could get them to go walking out there to Bird Island, they would fall in love with it.” The Kindred Spirit Mailbox was the destination. The magic of the Mailbox convinced a lot of ordinary folks that the island should be preserved. A frivolous lawsuit charging that Frank’s beach walks were trespassing brought national media attention, including an article in the New York Times on January 2, 1995. In 2002 the state of North Carolina purchased approximately 1,200 acres to create the Bird Island Coastal Reserve.
Frank’s efforts to save Bird Island were motivated by his love of the natural coastal landscape of undulating dunes, sea oats, and maritime forest. The turtles and pelicans needed a sanctuary, but Frank also understood that all the people (especially mainlanders like himself) should be able enjoy the strand, sunshine, and healing waters of the Atlantic. In 1958, when Frank’s father purchased property along the Intracoastal Waterway from Mannon C. Gore an old-fashioned “Gentlemen’s’ Agreement” still held weight. Mr. Gore shook Ben Nesmith’s hand and promised the beach road would extend to the Atlantic Ocean with a 100-foot dedicated public right of way. Property owners within Mr. Gore’s “Twin Lakes Development” would always have free and easy beach access. Sunset Beach was changing and in 1977, Mannon’s son, Ed Gore, chose to disregard his deceased father’s promise. Ed put up a barricade to block the public from traversing the land, which came to be known as Lot 1A. About a year after Ed erected his split-rail and barbed-wire fence, Frank parked his car and sat on the hood, openly defying the purported owner, Ed Gore. Later that day, Frank’s tires were slashed, his nose punched, and his shirt bloodied. He was arrested for trespassing. It took twelve years, but in September 1990, Frank was vindicated by the NC Supreme Court. That ruling came after a five-year legal battle brought by Sunset Beach Taxpayers Association and co-defendants Albert Wells, Charles Smith, and Whaley Hunt. The land where Frank had trespassed was rightfully returned to the public. Lot 1A is now home to the Gazebo, public parking, and a gateway for thousands of visitors to the strand and ocean.

Frank loved his Sunset Beach, but he also loved to roam. He traveled to all of the lower Forty-Eight states in his rickety RV with his beloved white lab, Spartina. After Frank drove his RV back home for the last time, he thought his traveling days were over. But there were other journeys to come.

In the summer of 1996, Frank met another great love, while leading a Bird Island Nature Tour, no less. After numerous walks that summer to the Mailbox with Cornelia Young Branch, Frank suggested they head west to hike the Grand Canyon together. Without training and with little preparation, a youthful sixty-nine and a seventy-year old embarked on the trip of a lifetime. They hiked down and spent the night in Phantom Ranch. Early the next morning, they ascended the Canyon and about halfway up the Canyon, Frank turned to Cornelia and said something like, “I can’t believe you agreed to come with me on this crazy adventure if we make it out alive I want to marry you.” Cornelia and Frank shared many walks to the Mailbox and spent happy years in Sunset Beach before Cornelia passed away in 2018. Frank shared his love of Sunset Beach to his family. He took great joy when Robin and her husband Dave Murray purchased the cottage next door and built their own home. Frank was very proud of his two grandchildren, Daniel Phillip Murray and Carolyn Elizabeth Murray, and cherished the fact that they loved to travel the world but still found time to come back to Sunset Beach. Even into his nineties, Frank was riding his trike to Bird Island and still the life of the party. During his last trip to the Mailbox on his 92nd birthday, Frank eloquently retold the story of the Kindred Spirit. In the spring of 2019, Frank held court at the Market in the Park with scores of adoring fans lined up to buy signed prints and to take selfies with the original Kindred Spirit.

Frank is survived by three children, two grandchildren, and dozens of nieces, nephews, and cousins. He was predeceased by his first and second wives, his brother, and his parents.

In honor of Frank’s memory, please show an act of kindness to a friend or stranger, walk to the Mailbox and leave a message, pick up a seashell or a piece of trash, plant a tree, go for a swim, or make a donation to your favorite environmental charity.

A “Celebration of a Life Well Lived” is scheduled for Saturday October 17, 2020 at the Kindred Spirit Mailbox on Bird Island.