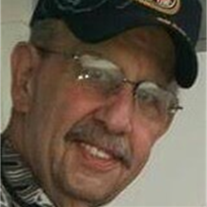 Gary James Bryant Sr. after a long struggle with cancer, went to be with our Lord in Heaven on Aug 4th 2016 in Southport, NC at the age of 69.

He is preceded in death by his Father, Mother, Brother & Sister.

Gary was born on September 7, 1947 in Akron, Ohio. He graduated from Garfield High School in 1966. He married Alice Bryant in 1969. Gary Retired from Chrysler Corporation in Twinsburg, Ohio. The couple together raised their 3 children in their home teaching them to love each other and respect their family. His children remember him as a strong, loving father who encouraged them to pursue their goals and complete all tasks they began.

Gary was a dedicated Marine. He enlisted in The United States Marine Corp in 1967 and spent 2 years actively protecting our country in Vietnam. He was a highly decorated Corporal and Honorably discharged in 1970. He lived the rest of his live with the motto “Once A Marine Always A Marine.”

Gary was a dedicated Husband, Father, Grandfather, Brother, Brother-in-Law, Cousin, Uncle, and Friend to all who knew him. He was an active and dedicated member of the VFW for several years.

A Memorial Service is will be held on August 15, 2016 at 11:00 AM at Ohio Western Reserve National Cemetery located at 10175 Rawiga Rd. Rittman, Ohio 44270 with a reception to follow at The Wilson’s Family Home at 3908 Stroup Rd. Rootstown, Ohio 44272. Pastor Jason Moore will officiate the ceremony. All are welcome to attend and celebrate Gary’s life. In lieu of flowers, please send donations to The Local Wounded Warrior Project. Condolences can be sent to www.coastalcremations.com. The family would like to thank Lower Cape Fear Hospice of Brunswick County for their care and dedication.

Arrangements are in the care of Coastal Cremations.
“Semper Fi”