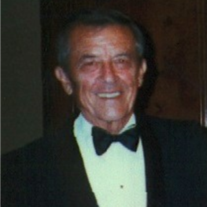 Jack Trovato passed away peacefully at age 91 at Novant Hospital in Brunswick County, North Carolina. Jack was born in 1925 in New York City, the son on Antonio and Frances Trovato who immigrated to America from Sicily in the early 1900s. Jack’s father served in WWI and was critically injured by mustard gas. As a result, Jack had to quit school at 12 to support his entire family including his parents and two sisters (Frances and Mary).

At the age of 18, Jack volunteered as a paratrooper in the 101st Airborne Division. He was awarded 2 Bronze Stars for his courage and valor during World War II. He authored a story recounting his experiences at the Battle of the Bulge entitled “My Longest Day.” The story appears in the book War Stories, The Men of The Airborne, published by Turner Publishing Company, and in Beyond Valor, by Patrick O’Donnell. Jack was also featured in 3 History Channel episodes of Shoot Out, which still air today.

Jack married the love of his life, Minnie Money in 1949, and they had two daughters, Jacqueline and Patti Ann. Patti passed away in 1983 in an automobile accident. Patti had a daughter, Jessica Bishop Brunetto, and Jacqueline had two children, Erik and Kris Oseth.

In 1952, Jack started Trovato Electric Inc. in Arlington, Virginia. Trovato Electric grew to be the largest contracting company in the state of Virginia, employing over 300 workers. In 1972, Jack started a general contracting company, building over 300 homes, shopping centers, schools, churches, warehouses and a state-of-the-art library in Tysons Corner, Virginia. He was Founder and Director of Madison Savings and Loan Association in Rosslyn, Virginia.

Jack and Minnie moved to Sunset Beach, NC to live with Jacqueline and her husband Jim Thomas in 2014. Minnie passed away in May 2017. Jack is survived by Jacqueline, and his grandchildren Erik, Kris and Jessica, along with 4 great-grandchildren, Cailyn Oseth, Ethan Oseth, and twins, Jillian and Brianna Brunetto. He was the life’s blood of our family, and will be sorely missed.