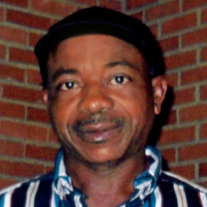 Kenneth Judge, 56 of Jacksonville, NC, passed away after a hard fought battle with terminal cancer on Friday, September 30, 2016 at his residence with his loving family by his side.

Ken was predeceased by his father, Calvin Judge and his sister Effie Irene Isler.

Ken is leaves behind to cherish his memory his mother, Sally Judge; his fiancÃ©, Jami Gore; his six children: Ashley Judge, Alicia Judge, Skyler Judge, Warren Gore, Allen Gore, and Damien Smith; five grandchildren: AJ Gore, Aziyah McClain, Akare McClain, Amair McClain and Amare McClain; four brothers: Mitchell Judge of Jacksonville, Vincent Judge (Vanessa) of Maryland, Eddie Price of Greensboro and Brad Price of Richlands; Three Sisters: Barbara Bell (Clemette) of Jacksonville, Patrie Toudle of Jacksonville and Belinda Garcia also of Jacksonville. He also leaves a host of nieces, nephews and cousins. Ken also leaves behind a very special boss, Bill Terrell, and a very special friend Lewis (LW) Petteway and many friends, too many to name.
Ken spent most of his working life as a handyman and a car detailer. He was a very special person to all who had the honor of knowing him. Ken will be greatly missed but never forgotten and will forever be in our hearts.

We the family are grateful to have family and friends like you. Thank you for all you have done in our time of need. Your many expressions of sympathy and love have been very comforting.

In lieu of flowers, the Judge family asks that contributions to the family be made at https://www.tmcfunding.com/search-fundraisers/campaign/818?layout=single

Arrangement are in the care of Coastal Cremations.