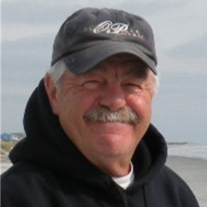 On Monday morning, October 16, 2017, Larry Vernon Clark, age 72, passed away with his wife by his side. Born in Baltimore, MD, son of the late Thomas Vernon Clark and the late Frances Struck Clark, Larry was the beloved husband of Barbara Ball Clark, devoted father of Heather Clark Wilson and Michael Thomas Clark, loving father-in-law to Scott Curran Wilson and Bernadette Guenther Clark, and loving grandfather of Kai-nalu Curran Wilson, Lily Corina Wilson, Callie Elizabeth Clark and John Vernon Clark. He was the beloved brother of Frances Bentz and Margaret Lowery, and a dear uncle to nieces and nephews.
Larry was everything a man should be: strong, kind, caring, generous, capable, had a loving outgoing personality, and never met a stranger. He touched many lives and will be greatly missed and lovingly remembered.
A memorial will be held at 2 p.m., November 7, 2017, at the VFW Lodge 7288 in Calabash, NC. A wake celebrating Larry’s life will be held 2 to 4 p.m. Saturday, November 18, 2017, at Monaghan’s Pub in Baltimore, MD. Those who wish to offer expressions of sympathy may do so by making a donation to the Humane Society. Please, no flowers.
The family would like to thank the staff of Grand Strand Regional Medical Center and the Lower Cape Fear Hospice for their kind support and care.
Arrangements are in the care of Coastal Cremations, Carolina Shores.