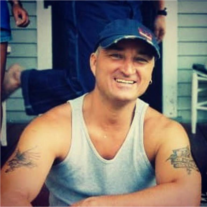 In an effort to escape the increasingly hot Wilmington summers without moving all his belongings back to his native England, Mark Broughton left this plane of existence last Friday to seek greater adventures.

A multi-cultured renaissance man of mystery and great artistic talent, Mark crossed the ocean after living on two continents before coming to Wilmington and blessing us with his generous hospitality and uncanny knack for meeting complete strangers at the most unusual times and places. Of course some of those strangers went on to become some of his dearest friends.

Always quick to challenge those who opposed him and never shy to express the way he really felt, this was Mark, for better or for worse. In an almost whimsical dance, he delighted in challenging friend and foe alike in his capricious mannerisms which often resulted in the reactions he sought. Where this immediately filtered out a few of the people he came in contact with, to the rest who stuck it out and got to know him, it became his trademark characteristic and one of the reasons he could be such a joy to be around.

He touched the lives of quite an eccentric group of people he came to know as friends with his compassion, love, loyalty, and brutally honest sense of humor. While He could appear reluctant on the surface to show his more sensitive side, it was obvious to those who knew him well that he had a soft and gentle side. He would stop everything he was doing at the drop of a dime to help a friend in need. his heart was the biggest of all, but it was stopped at just 52 years old

Although He rarely cited specific religious beliefs, it should be known that he had a deep yearning for spiritual growth in order to better understand himself in hopes that he could have a positive impact on the people whom he cared about. That being said, if he owes you a beer and you do see him in Heaven, he’d likely welcome you to buy him another pint… or two.

Mark was not just known for expressing himself with his tongue, but was equally gifted with his paint brush and artistic vision that mirrored what many clients subconsciously wanted but couldn’t articulate themselves. Having apprenticed in England to learn English style Faux painting and eventually gaining a master status in his art, He could make a plain piece of pine from the lumber yard look like say, a moldy sea log under various stages of decay and yet it would be the most beautiful piece of wood one could imagine in their living room. Hence his business Naked Faux was revered throughout the area and beyond

It’s safe to say that Mark left a positive impression on those whom he cared about and enough hysterically funny experiences to last an entire life time of reminiscing. He leaves behind his siblings, Denise, Kevin and Paul and a funny looking bull terrier named Pike. So If you knew him well, he was also a part of your family too, as you were part of his

To a beautiful and courageous soul who has made a lasting impression on so many, may his journeys forward be filled with peace and the many blessings he deserves. "Til we meet again Mate!!"