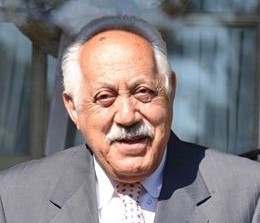 Beloved husband, father, and Papou, Michael Louis Kyriakoudes, 85, passed away on June 23, 2021 at 10:30 a.m. at Lower Cape Fear LifeCare in Wilmington, NC surrounded by the love of his family.

Michael fought a courageous battle that embodied his faith, strength and grace. Despite his pain, he always had a smile and a joke for everyone.

Michaels’s life and spirit personified the “American Dream”. Born on October 26, 1935 in Lefkara, Cyprus to Louis and Frosso Kyriakoudes, he and his family immigrated to New York City when he was just 15 years old. He proudly served in the United States Army from 1957-1963. After his discharge, Michael followed in his father’s footsteps and opened his own successful restaurants in Brooklyn and Long Island.

He met the love of his life, Rosemarie McCormick, in Brooklyn, N.Y. at the Normandy Diner, the restaurant he owned with his father. They were married on June 24th, 1962 in St. Spyridon Greek Orthodox Church in New York City. Michael passed away just one day shy of their 59th anniversary. Michael always said that the key to a happy home lay in two words, “Yes, dear”!

In 1978, Michael and Rosemarie moved their family to Wilmington, NC where he opened Mike’s BBQ Restaurant. The restaurant was a local favorite until he retired in 1997. He took pride in his business and the connections he formed within the community.

Michael was a lover of nature and was happiest in his backyard tending to his plants, birds, and Koi fish. He loved his family deeply and felt that his legacy lived on in the laughter and love shared within the beautiful family that he and Rosemarie created.

A celebration of Michaels’s life will take place at 11:00 a.m. on Thursday, July 1st at St. John’s Episcopal Church, 1219 Forest Hills Drive, Wilmington, NC, where he was a member for over 40 years. In lieu of flowers, donations can be made to the Wilmington Veterans’ Association or the New Hanover County Arboretum.