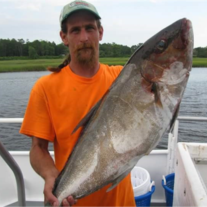 "Mike" was born in Fayetteville NC. He was a commercial fisherman for years and always called the ocean his home. He lived life to it’s fullest,always pushing boundaries and testing his limits. He never let the fear of failure keep him from trying. He was a loving father and a kind friend who was always willing to lend a hand to someone in need. To have met him, was to remember him. Mike is survived by his wife of fourteen years, Emma, three daughters Angel ( Nana Goat) , Hope (Boy), and Faith (Sharkbait) , and his heartfelt son Logan (Lolo). He is also survived by his Father Joel Jolly and Stepmother Peggy Jolly of Siler City, NC, Mother Linda Eaton and Stepfather John Eaton of Myrtle Beach, SC, a sister Amy Jordan of Myrtle Beach, SC.

Remaining survivors include grandparents ,aunts, uncles, cousins ,and several nieces and nephews. The family ask that you join them Sunday November 12th to honor the life of Mike. Services will be held aboard the Hurricane 2 at 1:00 pm in Calabash, NC.