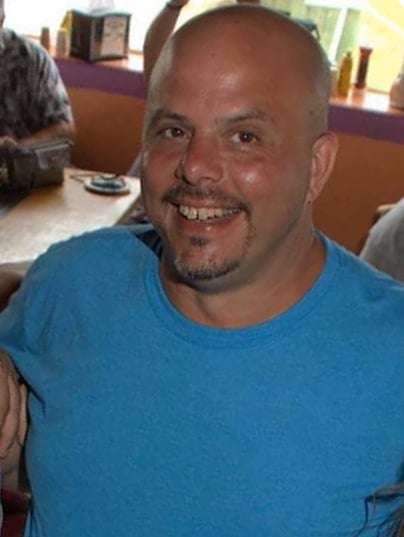 Michael John Speedling, 51, passed away on April 18th surrounded by his family while peacefully listening to the calming sound of the ocean, after a two-year battle with liver cancer.
Michael was born in Poughkeepsie, New York on September 24th 1968 to Fred Speedling and Linda Lawson.

In his younger days, Michael spent his time volunteering with the Rhinebeck, NY Fire Department. His passion for NASCAR and racing ultimately led to him spending his weekends assisting his brothers and nephews at the dirt track. Michael worked for FedEx Freight starting in 2008 and worked for them until his passing.

After spending most of his life in Rhinebeck, NY, Michael and Dawn moved to Oak Island in 2017 and fulfilled their dream of living at the beach where he spent all his weekends enjoying the time at the ocean. When he wasn’t on the beach you would find Michael enjoying a NASCAR race, watching football, watching hallmark movies or cooking his Granddaddy’s BBQ chicken on his smoker. Ultimately none of his favorite pastimes could compare to the moments spent with his family, especially his grandson.

Cremation to be performed by Coastal Cremation in North Carolina. Condolences and memories can be posted to their website www.coastalcremationsnc.com, under Obituaries. Michael’s life will be celebrated on Friday, July 3, 2020 in NY. The service will be available on live-stream for those unable to attend. Additional details will be posted on the family gofundme page.
In lieu of flowers donations can be made to the American Liver Foundation or the gofundme account (https://www.gofundme.com/f/aufkp-fight-for-mike) to assist the family with his services.

Coastal Cremations is serving the family