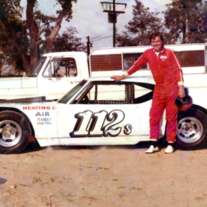 He moved to Wilmington with his parents and siblings in1954. In his late teens he traveled to California where he met his first wife, Betty Lou Olson. They settled there while he pursued his dream of racing and establishing Allen’s Auto Body. They were blessed with three children: Sheila Kay Allen (deceased) formerly of Wilmington (Otto Lindsey), Timothy Ray Allen of Wilmington and Christina Allen Carlisle of Wilmington (Kevin Carlisle). He shared his love for adventure with his family. They often traveled and visited with family and friends all across the United States. They moved back to Wilmington in 1975 where he reestablished his business in Leland, NC.

He met his second wife, Doris Faye Gaw of Southport in 1994. They married on 12/12/12 (12, a significant and favorite number). They built their dream home in Leland, NC where they shared many years of love and happiness together. He was also blessed with 3 stepchildren (that he considered to be his own): Pamela Levandoski Nelson of Leland, Lisa Levandoski Spivey of Leland and Ronald Joseph Levandoski, Jr. of Rocky Point.

The families listed above and 2 sisters, Eloise Allen Ketterman of Wilmington (Russell Sage Ketterman, Jr., deceased) and Mae Johnson of Portsmouth, VA and 1 brother Gary Wayne Allen of McCormick, SC (Sue Franklin Allen) survives him. Many nieces, nephews, cousins and friends that were like family to him also survive him.

Ray had many ventures in the Automotive Industry over the years. He was a racecar
driver, mechanic, auto body man, salesman, business owner, among countless other endeavors. He had a special talent for automotive custom paint (on just about any kind of vehicle) and people came from all over for his custom paintwork. He always had big ideas and relished in sharing them and trying to achieve them. His last business was Atomic Auto World in Leland, NC.

Ray was many things to many people and left a lasting impression on everyone he met. Truer words have never been spoken when we say, “Ray never met a stranger”. He left behind many wonderful stories. We, his family, hope you will share them with us when we celebrate his life.

By his request there will not be a funeral, but a celebration of life at his home in Leland (8848 King Road). The pig pickin’ will be from 4pm-8pm on July 23, 2016. Please bring a story and a side dish to share. Also, any pictures would be appreciated. If you cannot make it, please feel free to share your pictures and stories on his tribute page.