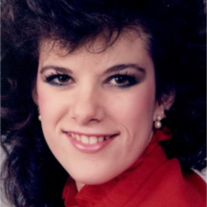 Renae Lynn Greenough, 49, made the world a more beautiful place on July 13, 1967, in
Wilmington, NC. She earned her pink wings and flew to Heaven on November 5, 2016.
The epitome of southern grace sprinkled with dry wit, Renae was easy to spot in traffic.
Adorning her Lexus was a message that read, “Honk if the Twins Fall Out.” The two greatest
loves of her life are her sons, Brandon and Trevor Donaldson, who survive their mother. She
proudly stood by their sides on their high school graduation day on June 11, 2016. Renae is now
reunited with her first son, Austin Trent Donaldson, who predeceased her upon his birth on
January 16, 1996. Surviving her is the father of her children, Cy Donaldson, to whom she was
married for 22 years. They met at John T. Hoggard High School, where Renae performed as a
Vikette and from which she was a 1985 graduate.
Renae’s love of flying led her to a career as a flight attendant, starting at Piedmont Airlines in
1989 and continuing with US Air. After her diagnosis, Renae ministered to fellow cancer-fighters
through a labor of love, fitting them for wigs at Sheila’s. She was a life-long member of
Masonboro Baptist Church where her faith was shaped at an early age. It was that faith and her
God-given determination that helped to sustain her throughout her valiant, four-year battle with
Stage IV breast cancer.
In addition to her twin sons, she is survived by her beloved parents, Wayne and Linda
Greenough, her beloved younger brothers, Keith (Caroline) Greenough and David (Melanie)
Greenough, a niece, Madison Greenough, a nephew, Parker Greenough, and a great-nephew,
Oliver, all of Wilmington. She is also survived by her Aunt Lorraine and Uncle Art Johnson, and
her Aunt Lana Kaye and Uncle Greer Craig, and cousins. She is predeceased by her
grandparents, Greer and Hazel Craig, Ernie and Lottie Mae Greenough, all beloved by her.
Lastly, she is survived by her precious spaniel mix, Sweetie, who has been her constant and
faithful companion for the past ten years, and her many beloved friends.
The family would like to thank the many health care workers at Cancer Treatment Centers of
America in Georgia and at Duke University Hospital in Durham, who provided treatment and
hope to Renae for the past several years. A special note of gratitude goes to Lower Cape Fear
Hospice, who provided aid and comfort to Renae in her peaceful transition, and to her many
friends.
Please join us for a Celebration of Life at Masonboro Baptist Church on Friday, November 11,
2016 at 11:00 A.M. Preceding the memorial service, Renae’s family will receive friends at the
church at 10:00 A.M.
In lieu of flowers, memorials may be made to Masonboro Baptist Church, 1501 Beasley Rd,
Wilmington, NC 28409. Cremation Arrangements are in the care of Coastal Cremations. Please share memories and condolences with the family by clicking on "Share a Memory."
2 Timothy 4:7
"I have fought the good fight, I have finished the race, I have kept the faith."