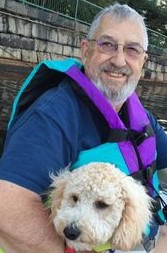 Richard (“Rich” and later, inevitably and irreversibly, “Dick”) A. Bessett,77, died at his retirement home in Calabash, NC, on August 18, 2021, after a brief battle with cancer. Born and raised in Holyoke, MA, the only child of William and (Blanche) Edna (Riviere) Bessett, Dick was a devoted son.
The greatest adventure of his life was his enduring romance with Julia (Mantere), with whom he celebrated 55 years of marriage. In Derry, NH, Dick and Judy raised two daughters, Danielle and Michelle, to be strong, independent, thoughtful, and loving women. They wholeheartedly welcomed Danielle’s partner, Ron Lembo, into their family, later joined by Charlie the dog and other four-legged “grandchildren.” He is also survived by his cousin Marion Kennedy, with whom he was particularly close. Dick and Judy enjoyed a rich social life with many dear friends, and there was nothing he loved better than spending time laughing with them, swapping good stories over cold beer.
Dick graduated from Our Lady of the Rosary High School in Holyoke, MA. He completed a technical program at RETS in Boston, but he attributed much of his professional success to his early after-school job in a local hardware store. He went onto work in research and later as a safety specialist in light industrial manufacturing. His name was listed on multiple patents, and he was especially proud that some of his work was included on space shuttle missions. He consistently rooted for the underdog and believed strongly in treating all people well and with dignity. As an organ recipient, he was acutely aware of how our lives depend on the generosity and good will of others.
Dick was a keen observer of the world, and the people who loved him appreciated his candor about 93% of the time. He was committed to understanding how things worked and cared deeply about doing things well. He loved to share his knowledge and, when something was broken, he was everyone’s first call. One of the last pieces of advice he reiterated before his death was to read the manual from start to finish after getting a new car. He insisted we be curious.
Dick “got a kick” out of many things. An avid, serial hobbyist, Dick was always working to master new skills. In his youth, he was an accomplished tap dancer and played classical guitar and bass. He also golfed, downhill skied, water skied, scuba dove, and roller skated. He was a talented photographer, cook and crepe maker, and in the last years of his life, woodworker. He loved music and sang along with oldies and “easy listening” songs. His enduring passion was boating, first on Lake Winnepesaukee, NH, and then on the ocean out of Cambridge, MA. We will remember him always with the wind in his hair and a big grin on his face.
In lieu of flowers, the family requests that you consider organ donation and talk to your family about your wishes (https://unos.org/transplant/). We had an additional twelve years with our beloved husband and father because an anonymous family entrusted him with their loved one’s heart; we were grateful for every single day.
Dick was fascinated by sea turtles and befriended all the neighborhood dogs: you may donate in his memory to the Sunset Beach Turtle Watch of North Carolina (https://www.sunsetbeachturtles.org/) or to the Brunswick County Animal Protective Services shelter (https://aps.brunswicksheriff.com/).
There will be a funeral mass at Our Lady Star of the Sea Catholic Church in North Myrtle Beach, SC. A celebration of life for Dick’s friends and family will be held at a later date, as public health conditions allow.
Share on Twitter Share on Facebook Share on Email
SEND FLOWERS