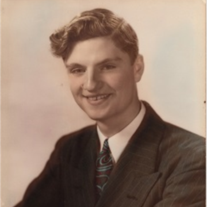 Richard K. Davenport 87, of North Myrtle Beach SC, (formerly of West Suffield CT) died peacefully on Sunday, (November 12, 2017), at Wilson Senior Care in Loris. Born March 17, 1930 in Worcester, MA, he was the only son, of the late Earl Chester and Beatrice (Hartness) Davenport.

Richard was a graduate of Grafton High School in Grafton MA, and graduated with honors from Worcester Polytechnic Institute in Worcester MA, with a degree in Electrical Engineering, in 1952. He retired after many years from the Hamilton Standard Division of United Technologies Corporation. He also was employed by the Wyman-Gordon Corporation for a few years, early on in his career.

He is survived by his loving wife, Sophie (Pashkoski) Davenport, and his devoted son, Richard E. Davenport.

He served as Treasurer and played the Flute in the choir of St. Stephens Episcopal Church in North Myrtle Beach. Richard was an award winning marksman, and former member of the Hartford Gun Club and an avid supporter of the NRA. He was a former Boy Scout and HAM Radio operator. He would often bicycle to work, over 10 miles a day, through the hills of Connecticut, for exercise and to relax. He and his wife Sophie enjoyed many summers, at their cottage up in Nova Scotia. During his retirement, he traveled with her to the Caribbean, South America and Alaska. He always wore a cheerful smile, and will be missed dearly, by all those that knew him.