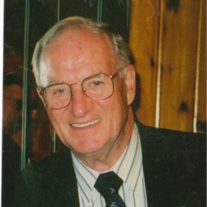 Roger J. Diesing, previous owner of Diesing Auto Supply Co. Inc. passed away on July 15, 2016 in Wilmington, NC. Roger was born on September 30, 1930 in Poughkeepsie, NY to Walter J. Diesing and Gertrude Powell Diesing. He was preceded in death by both his parents, his brother Walter P. Diesing who also passed away this July, and his sister in law Marion Seils.
He is survived by his wife of nearly 65 years, Joan D’Luhosch Diesing; daughters JoAnn Tucker (David), Denise Lachanski (Rick), and Jill Houlahan (Jim); and son Douglas R. Diesing; 12 grandchildren and 12 great-grandchildren.
Roger graduated Poughkeepsie High School in 1948. He joined the Marine Corp. that year and was a Sgt. when he was honorably discharged in 1955. He was married in 1951 to his childhood sweetheart. He joined his father and brother in business at Diesing Auto Supply Inc. He owned and operated it until the business was sold in 1989.
Since his retirement and leaving Poughkeepsie, he has resided in Kiawah Island, SC; St. James Plantation, NC and Wilmington, NC.
Roger loved music and played the trumpet most of his life. A celebration of life will be held in Southport, NC in August followed by a memorial service in Poughkeepsie, NY. He was a wonderful husband, father, and grandfather and will be greatly missed by many. Arrangements are in the care of Coastal Cremations. Please share memories and condolences with the family by clicking on "Share a Memory."