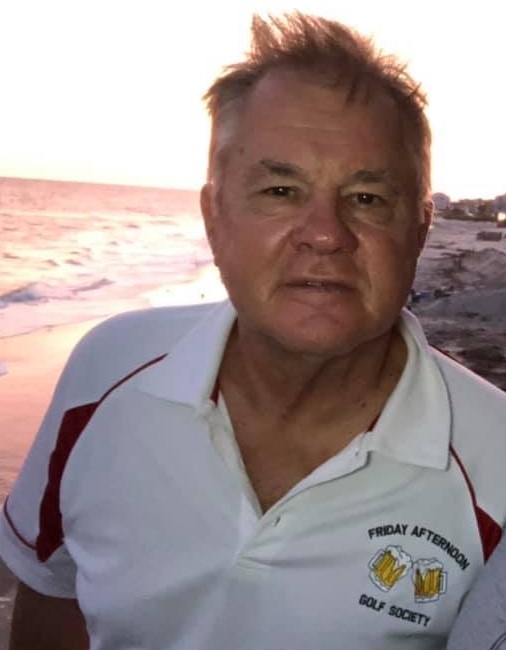 Ron Pecina, 75, of Carolina Shores, passed away peacefully on Monday, May 16, 2022 at Duke University Hospital in Durham, NC after a long and courageous battle with Leukemia.

He hailed from Garwood New Jersey and attended Clark High School where he became an outstanding athlete and excelled in football and track. He still holds the record from 1965 for the 110/100M Hurdles. He graduated from Arthur L. Johnson High School (ALJ) in 1965. After graduation, he attended Missouri Valley College in Marshall, MO on a full Track Scholarship. He liked to share his story about the track meet he had with Graceland College in Iowa, in which he ran the 440 hurdles and on this day stole the show by beating out Bruce Jenner. He also participated in
college football and after he graduated he played professional football with Hamilton Tiger-Cats in Hamilton, Ontario, Canada for a brief period. He soon became a Educator of Physical Education and Health and worked with the Newark School system for 32 years. He was most proud of his wife, Ellen and his two children Ron Pecina, Jr. and Amy Pecina Walski and his grandson, Jack. Ron also enjoyed coaching high school football and was active with Westfield High School in Westfield New Jersey where he resided with his family for 34 years. He coached at his alma mater ALJ and at Elizabeth High in Elizabeth New Jersey. He loved sports and was instrumental in sending many high school football players to college to further their education. He also enjoyed being a high school Officiator of basketball and was a member of International Association of Approved Basketball Officials Inc. (IAABO) Board 33. He volunteered in Westfield NJ with his son and daughter for their sports both football and soccer. Ron and his wife relocated to Carolina Shores NC in 2006. After he retired he loved spending time with his ALJ classmates and coaches at biannual reunions in Clark New Jersey where they would honor ALJ graduates with scholarships. He enjoyed volunteering in Carolina Shores and was always ready to help a neighbor. He never met
a stranger.

He is survived by his wife, Ellen, his son Ron Jr and wife Marisa, his daughter, Amy Walski, her husband, Harry and grandson Jack.

There will be a Celebration of Life at the Calabash Covenant Presbyterian Church on June 26, 2022 followed with the family receiving friends at the Carolina Shores Golf Clubhouse.

In lieu of flowers donations can be made to the Leukemia & Lymphoma Society at LLS.org.